Articles in this section

SmartCPA is a basic CPA with automatic optimization algorithm based on a Self-Serve Platform allows you to pay only for conversions. It automatically matches your CPA offers to 100% targeted users, helping you reach a more relevant audience.

Automatic optimization algorithm matches your CPA offer with users that are interested in such content. The traffic selection system needs a quick test, before launching a working CPA campaign.

The test period will indicate whether your campaign is effective with the selected targetings. Test results and statistics will be recorded on the "Dashboard" page in the "Campaign" tab at the end of the testing period.

How to launch a SmartCPA Campaign?

1) To start a SmartCPA campaign, you should first set up conversion tracking first. Read here.

2) Now when the tracking URL is ready for use, go to the "Campaigns" page.

You’ll see the menu with general information about your new campaign.

4) Name your campaign and choose SmartCPA (note that SmartCPA is available for all advertising formats) as the pricing model & fill in your Target URL.

This is the landing page (or URL provided by a third party system like Voluum or AdsBridge) that the user will be directed to.

You can choose GEO by inputting the names of countries manually. For more accurate test results one GEO per campaign is allowed.

Conversion Cost is the amount of money you are willing to pay us for getting one conversion.

Tip: the recommended conversion cost must be 70-80% of your CPA network’s payout. This will speed up the process of matching the most relevant traffic sources.

5) Fill in the details about your campaign's Budget.

These settings are very important, so please read our recommendations thoroughly.

The amount of money you’re willing to spend per day on this campaign.

If your campaign runs out of its daily campaign budget, it stops. We DO NOT RECOMMEND setting a Daily Campaign Budget.

The amount of money you are planning to spend on this campaign for the entire working period (not including the Test Budget). If your campaign runs out of its total campaign budget, it stops.

Please make sure you have enough funds in your balance to cover the Total Campaign Budget + Test Budget Limit. Otherwise, your campaign may be stopped due to a lack of funds and testing will not be completed!

You can set the running period manually using the calendar or choose one of our presets: weekdays only or weekends only.

By default, the campaign has no End Date. If you want to set an End Date, check "Set display period".

We DO NOT RECOMMEND setting End Date for SmartCPA campaign. If your campaign will be stopped by scheduler during the test period you will have a need to create new SmartCPA campaign to continue testing this offer.

You can use Simple targeting mode or switch to Advanced.

In simple mode, you can target by:

In advanced mode, you can target by:

You can also include or exclude Ad Zones (if you already have collected some white/blacklists).

These settings are very important, so please read our recommendations thoroughly. 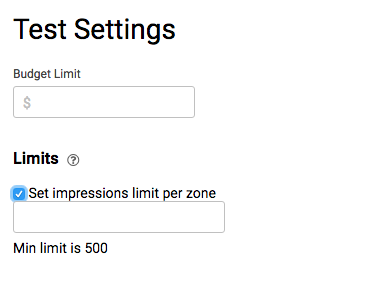 Amount of money you should be ready to spend entirely on testing.

What is the appropriate sum of the Test Budget Limit?

The bigger the budget you set, the more zones (ad placements) will be tested for the chosen targetings. Our optimization algorithms will take some time to gather enough data and find the most relevant traffic for your offer. In other words, the bigger your Test Budget Limit, the more traffic you’ll get.

Note: The minimum Test Budget Limit should be more than $30.

The slice limit per zone is the maximum amount of ad impressions you’re willing to get from one traffic source test zone or one GEO.

It prevents you from spending your test budget on zones with a huge amount of traffic.

Once this limit of impressions is reached, the optimization system will automatically check whether the zone provides a good conversion rate or not.

In the case when the conversion rate is acceptable, your SmartCPA campaign will obtain more traffic from this zone over the limit.

Otherwise, your campaign will move to the next test zone with a new limit of impressions.

The default limit set is eligible for most of the test campaigns. Still, you can reduce the restrictions.

This option allows the test to stop at the earliest period in case it doesn't go so well. Enable it to prevent your campaign from spending your budget.

9) After you’ve filled in the forms and set the targetings, click "Save and Start".

The campaign’s test will be launched immediately after passing moderation.

How does the SmartCPA Campaign work during the test period?

After approval, your SmartCPA campaign will be active with the "Testing" status (a test tube icon). You can find it on the "Campaigns" page.

During the test period, the optimization algorithms pick out zones (websites) to find the most relevant traffic for your offer based on zones (websites) CR level.
Zones with the appropriate CR level automatically become whitelisted whilst low CR zones exclude from the campaign.
Keep in mind that our system needs time to test your offer, so the longer the test runs, the more effective it will be.

Please note: We DO NOT RECOMMEND stopping your SmartCPA campaign during the test period. Once our algorithms have started working with the settings and targetings you’ve applied, they should not be changed until the test has ended.

Even if you decide to continue with the same offer, you will need to create a new SmartCPA campaign!

My campaign’s test period is over. What’s next?

When the test is over, you will see the results in your Dashboard, and your SmartCPA campaign will automatically change its status from "Testing" to one of these:

Congratulations! Your offer is converting well. Your campaign has passed the test period, and it can continue running with the CPA pricing model as long as you need. You’ll pay only for completed conversions.

Unfortunately, there were not enough conversions during the test; your campaign was not effective and was stopped by our system to prevent you from losing money.

There might be a few reasons for that:
- Offer doesn't match with Clickadu traffic. Try another vertical.
- Target URL wasn't created properly and the system couldn't count conversions.
- Cost Per Action bid is too low or the test budget wasn't enough to pick up all the possible zones.