All Collections
Advertisers
Pricing Models
How do the test settings impact my CPC campaign performance?

How do the test settings impact my CPC campaign performance?

To start working with a CPC pricing model, you need to evaluate/measure the effectiveness of your campaign/offer first. For this, a campaign must complete a ‘Testing Period’. 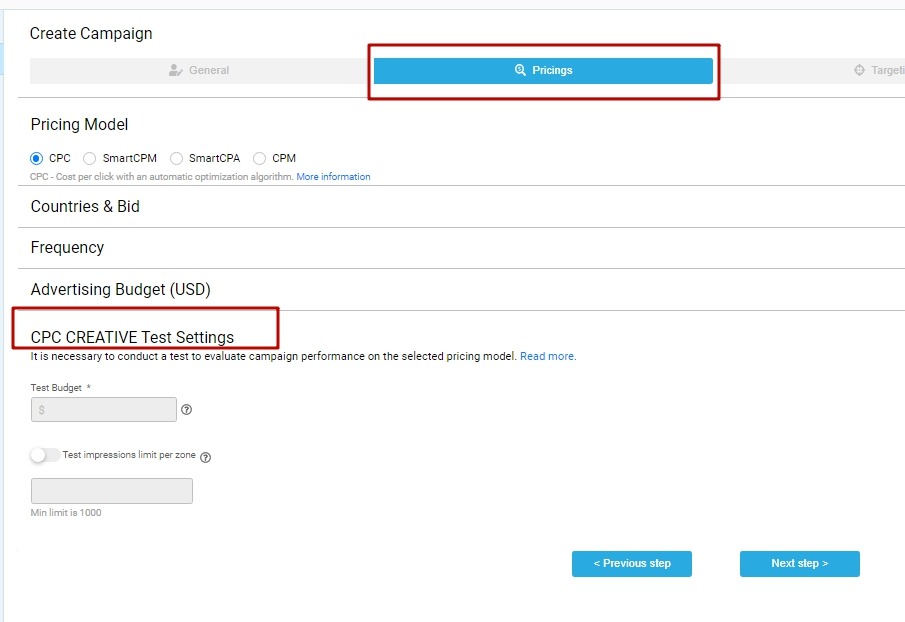 The testing budget refers to the funds that will be deducted from your campaign’s budget if the overall cost of produced clicks will not cover the expenses of the tested traffic.

We recommend you set your test budget in accordance with the amount that is usually, based on your experience, enough to estimate your campaign’s/offer’s performance.

However, you should always take the available volumes of traffic on specific GEOs into account. If the selected geo has got a huge volume of traffic (for example, IN, PK, BR), it is better to set a higher test budget to be able to test more zones and, thus, get more traffic.

If the selected geo has a low traffic volume, it is advisable to set a smaller test budget. Otherwise, a Testing Period may last for several days.

Please note: the minimum test budget for the CPC campaign is $5.

This option will exclude zones that do not bring a single click, after a certain number of impressions has been sent to it, from the campaign’s rotation. This will prevent you from buying unnecessary traffic that does not show good results with your offer.

What is a test?

To evaluate the effectiveness of a campaign, it is necessary to send a certain amount of traffic to the offer and measure its early results. You have to set a test budget, which will be used to buy traffic for evaluation. A special algorithm will be applied to calculate an optimal bid for each specific zone.

Tests could be free and compensated.

If the overall cost of received clicks covers, or is higher than, the expenses of the tested traffic, a test is considered free since you are only paying for clicks.

If the overall cost of received clicks does not cover or is not greater than, the expenses of the tested traffic, the difference is compensated from the test budget. Such tests are called compensated.

For instance, we have “Campaign A” and “Campaign B”.

The testing budget is set to $10. This means that a campaign has received an amount of traffic worth $10 during the test.

The number of clicks is 25.

As we can see, the overall cost of produced clicks has fully covered the traffic cost, which was spent on the test. This way, you pay only for clicks.

The testing budget is $10. Accordingly, the campaign received an amount of traffic worth $10 during the test.

The number of clicks is 20.

So, a traffic cost is calculated in this way:

In this case, you pay both for clicks and for the traffic used for the test.

The bigger the test budget, the more traffic a campaign will receive during its test, and, thus, more zones will be tested.

Now let’s take a look at what happens to the zones during and after a test.

Smart campaigns have a self-optimization function. The "Set impression limit by zone" section allows you to receive an appropriate amount of impressions from a specific zone in case it does not produce any clicks. This option excludes zones from a test that don’t provide a single click after a fixed volume of impressions has been received from it. This will prevent you from buying unnecessary traffic that does not show good results with your offer.

The main purpose of the test is to determine traffic zones that produce more clicks. The zones with clicks are the most lucrative, and we want to get more traffic from them. Let’s take a closer look at what happens when a good zone is found during a test. After a zone has produced some clicks, the system forms an eCPM (effective CPM) for this zone and continues to buy traffic on the zone according to this very eCPM. From now on, the needed traffic is purchased both as a part of the test and out of it (independently).

On the Dashboard, you can see the current test cost as well as separate costs for the zones that work according to their own eCPM. For this reason, you may see the campaign in the testing period has spent more than a previously set test budget.

A test is considered complete when a campaign has received the traffic volume worth the defined test budget. After that, the system will evaluate the test results according to internal metrics and assign a specific status to a test. A test status will determine how a campaign will function in the future.

Possible reasons for the ‘Failed’ status:

Possible reasons for the ‘Not so good’ status:

The duration of the testing period depends on a test budget that you set and the volume of traffic on a chosen GEO. A test can last from several minutes to several hours on GEOs with huge traffic volume, and from several hours to several days on GEOs with a low volume of traffic. Please also note that the more specific the targeting of your campaign is, the longer its test will last.

What is the testing period for? Can I run my campaigns on pure CPC?

Zones with low performance are automatically excluded from a campaign’s rotation during the test and from the campaign in general. It also helps to form blacklists for future tests/campaigns.

A campaign purchases more traffic from zones that have received more clicks in the past.

While your campaign is in the testing period, you cannot change its targeting settings, but click cost.

If your active campaign’s targeting is modified in any way, it will be sent for moderation once again. However, if you decide to change its click cost, your campaign will carry on working (or being tested).