You can find the ‘Campaigns’ page in the toolbar on the left side of the page:

You can look through all your campaigns (Active or Archived) here, manage them, see their statistical data for a chosen period, and start/stop/duplicate your campaigns:

Let's have a closer look at the upper part of the 'Campaigns' page:

1. The Refresh button allows you to renew the data of your campaigns shown on the page;

2. The 'ID/Name' field is a handy tool to search for a certain campaign you'd like to modify either by entering their ID or name;

3. The 'Status' drop-down list allows you to filter out campaigns by their current status, which include the following: 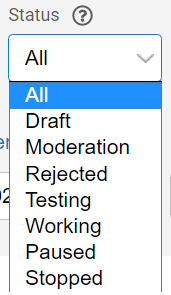 All campaign statuses description can be found below:

- Draft (you created a draft of a campaign, but did not start it);

- Moderation (you have started your campaigns, and it has been submitted for moderation);

You can come across the following ‘Stopped’ sub-statuses:

- Working (if the test was successful (CPC/SmartCPA models) or after moderation);

You can come across the following ‘Working’ sub-statuses:

Working; test: not so good (appears when a CPC/SmartCPA campaign received many conversions/clicks during its testing period, but it was successful only on some of the zones);

Working; test: succeeded (appears when a CPC/SmartCPA campaign received many conversions/clicks during its testing period and was successful on most of the tested traffic sources);

Paused: Out of daily budget (appears when a campaign has reached its Daily Budget that was set by you before it was started).

- Rejected (appears if your campaign’s been rejected by our moderation team).

4. The 'Origin' drop-down list indicates whether a campaign was created by you (SSP) via the platform or by your manager (Managed): 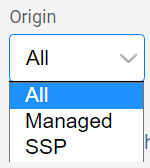 5. By using 'Archived', you can access your archived campaigns. Archiving helps to keep your ‘Campaigns’ page tidy and hide the campaigns that you don't work with;

6. 'Ad Format' enables you to sort your campaigns depending on the format: 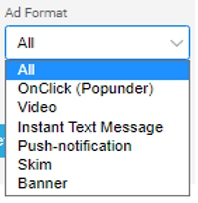 7. Similarly, the 'Price Model' list does just about the same, but price model-wise:

8. Here you can set the dates you want to gather your campaigns' stats for.

Please note! Do not forget to click on the 'Set' button after choosing all the filters you need.

What is more, you can also set which parameters (columns) are shown on the page. You can do this by clicking on the ‘Columns’ button, as shown in the picture below: 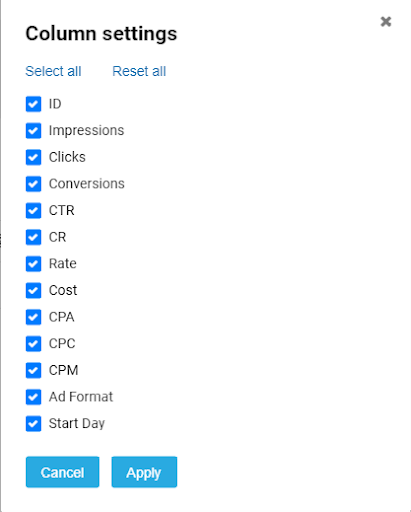 Here is a description of each column’s parameters:

St: status of a specific campaign;

ID: a unique ID assigned to each of your campaigns (consists of 7 digits);

Name: a name of a specific campaign;

Impressions: a number of impressions a given campaign has received for a chosen period;

Clicks: a number of clicks a given campaign has received for a chosen period (if applicable to a certain ad format);

Conversions: a number of conversions a given campaign has received for a chosen period of time (if you have received conversions on your side but do not see them in our statistics, please check your postback settings);

CTR (Click-through rate): Click-Through Rate of a given campaign (Clicks/Impressions*100%);

Rate: shows a bid that you set when creating or making changes to campaigns (this column also shows the pricing model of a campaign);

Cost: an overall cost of a given campaign for a chosen period (expenses on a specific campaign deducted from your balance);

CPA: a calculated CPA rate of a given campaign (Cost/Conversions);

CPC (Cost per click): a calculated CPC rate of a given campaign (Cost/Clicks);

CPM (Cost per mile (per thousand impressions)): a calculated CPM rate of a given campaign (Cost/Impressions*1000);

Ad format: shows the ad format of a chosen campaign;

Start day: a day on which a campaign was initially launched or is scheduled to become active on;

Actions is a column where you can:

1) Edit a campaign (by clicking on a

icon you can access a campaign’s page where you can make changes to it);

2) Duplicate a campaign (by clicking on a

icon you will be able to create a copy of the campaign);

3) Archive a campaign (the

button allows you to archive a campaign that is no longer relevant to you);

button to Start/Stop a specific campaign);

After you have duplicated/copied a campaign, it will appear with the name “Copy of ***” on the ‘Campaigns’ page:

To edit this campaign, you can click on the name and select ‘Edit campaign’ at the bottom of the page or click on the

icon located in the ‘Actions’ column to open the editor mode at once: 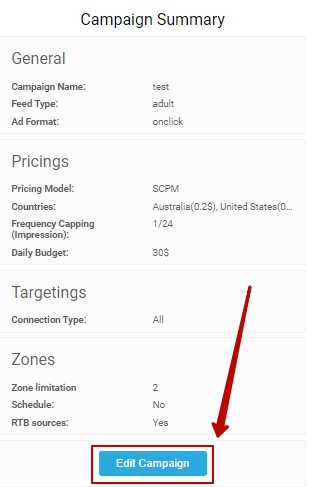 When editing the campaign, you will be able to change all the settings (where applicable to a certain pricing model), except for the ad format and pricing model.